Do you have a fear of wasps or bees? Getting educated about each one can help prevent or protect you or your loved ones from any damage that these insects may cause. Here is a short video to watch, with some simple solutions.

What To Do After Being Stung By A Wasp

Wasp stings are common, especially during the warmer months when people are outside for longer periods of time. They can be uncomfortable, but most people recover quickly and without complications.

Wasps, like bees and hornets, are equipped with a stinger for self-defense. A wasp’s stinger contains venom (a poisonous substance) that’s transmitted to humans during a sting.

However, even without a lodged stinger, wasp venom can cause significant pain and irritation. It’s also possible to have a serious reaction if you’re allergic to the venom. In either case, prompt treatment is important for alleviating symptoms and complications.

Symptoms of a wasp sting

The majority of people without sting allergies will show only minor symptoms during and after a wasp sting. The initial sensations can include sharp pain or burning at the sting site. Redness, swelling, and itching can occur as well.

You’re likely to develop a raised welt around the sting site. A tiny white mark may be visible in the middle of the welt where the stinger punctured your skin. Usually, the pain and swelling recedes within several hours of being stung.

“Large local reactions” is a term used to describe more pronounced symptoms associated with a wasp or bee sting. People who have large local reactions may be allergic to wasp stings, but they don’t experience life-threatening symptoms, such as anaphylactic shock.

Large local reactions to wasp stings include extreme redness and swelling that increases for two or three days after the sting. Nausea and vomiting can also occur. Most of the time, large local reactions subside on their own over the course of a week or so.

IMPORTANT! Let your doctor know if you have a large local reaction after a wasp sting. They may direct you to take an over-the-counter (OTC) antihistamine medication to reduce your discomfort.

You could have one strong reaction and never show the same symptoms again. However, a large local reaction could be the way your body routinely responds to wasp stings.

Note: Wasp stings are alkaline. Vinegar is acidic and can help neutralize the alkalinity of wasp stings.

• Wash the sting area with soap and water to remove as much of the venom as possible.

• Soak a cotton ball with apple cider or white vinegar and place it on top of the affected area of the skin. Use slight pressure to help with the pain and inflammation. Leave it there for several minutes.

• Apply Dr. Cole’s Herbal Extraction Balm directly onto and around the area. The blood root in this product, will help to pull any venom left in the bite out from under the skin.

• If needed, apply a cold pack to the wound site to reduce swelling and pain .

• Keep the wound clean and dry to prevent infection.

• Cover with a bandage if desired.

What To Do After Being Stung By A Bee

Wasp and bee stings can cause similar symptoms, but the treatment measures are slightly different. While a bee can only sting once because its stinger becomes stuck in the skin of its victim, a wasp can sting more than once during an attack.

Unless you’re allergic, most bee stings can be treated at home.

Note: Bee stings are acidic. Baking soda is alkaline and can help neutralize the acidity of bee stings.

• Slowly move away from the area where you were stung. Don't start batting away other bees that may be around. Calm down and remain focused.

• Take a good look at the area that has been stung and locate the stinger.

• If the stinger is visible, immediately do what you can to scrape your a nail or a sharp object over the stinger to dislodge it from your skin. You can also pull the stinger out with tweezers, if you have them available. The longer the stinger is lodged in the skin, the more harm it can do.

• Wash the sting area with soap and water to remove as much of the venom as possible.

• Create a baking soda paste by mixing water with baking soda into the consistency of a paste, and apply it over the area of the sting. Leave it there until it dries, up to 1/2 hour or so, and then wash it off.

• Apply Dr. Cole’s Herbal Extraction Balm directly onto and around the area. The blood root in this product, will help to pull any venom left in the bite out from under the skin.

• If needed, apply a cold pack to the wound site to reduce swelling and pain .

• Keep the wound clean and dry to prevent infection.

• Cover with a bandage if desired.

IMPORTANT! If you have a known bee allergy, administer an EpiPen immediately, or call 911. You should also see your doctor if an infection occurs. Symptoms include redness, increased swelling, and pus. 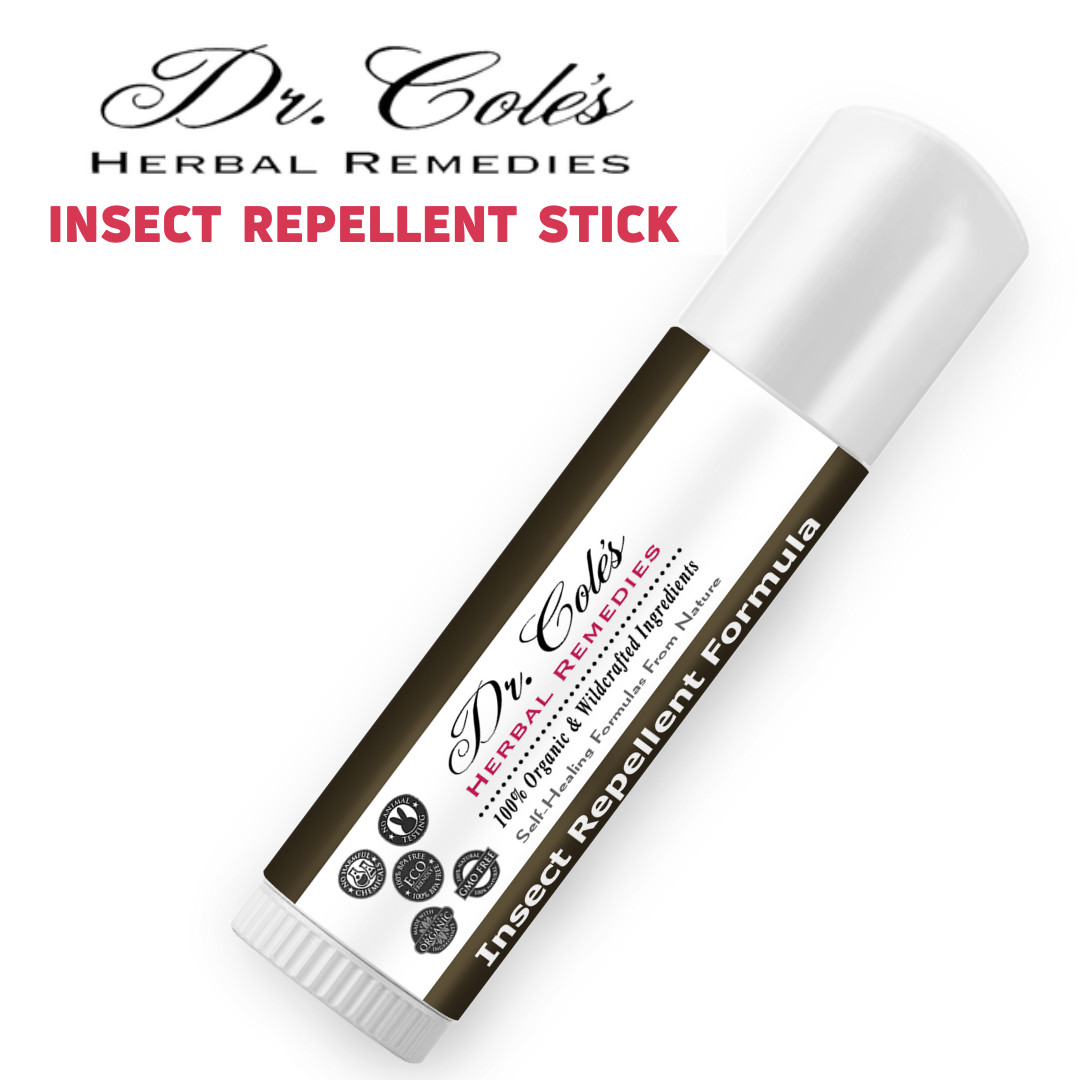 Dr. Cole's Herbal Insect Repellent Stick - An easy solution that was formulated to keep insects of all kinds away from you in the first place. Simply open this stick and massage it onto the exposed areas of your skin that bugs would most likely be attracted to. Easy to carry in your pocket or purse so it can be applied as often as needed in any situation. Insects hate the smell of the ingredients in this balm and should stay far away from you or your children. Can also be used on pets.

Dr. Cole's Herbal Extraction Balm -  This is the product to use after you are bitten by any kind of an insect. This has always been one of Dr. Cole's most popular products, used to extract everything from serious bug or spider bites to infected pimples or intense skin rashes. Follow the instructions closely and let it go to work to reduce all sorts of skin impurities that would otherwise be difficult to handle. 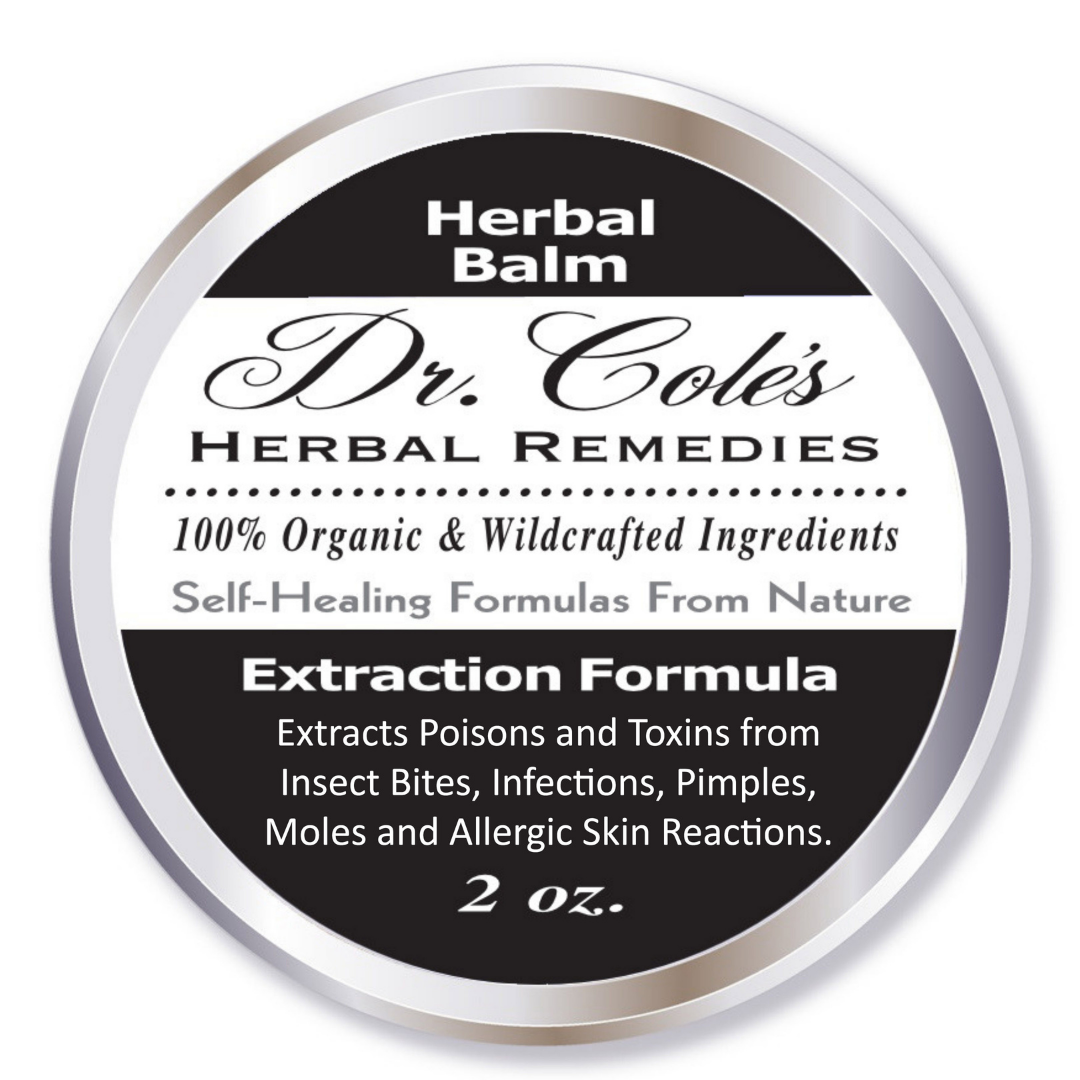 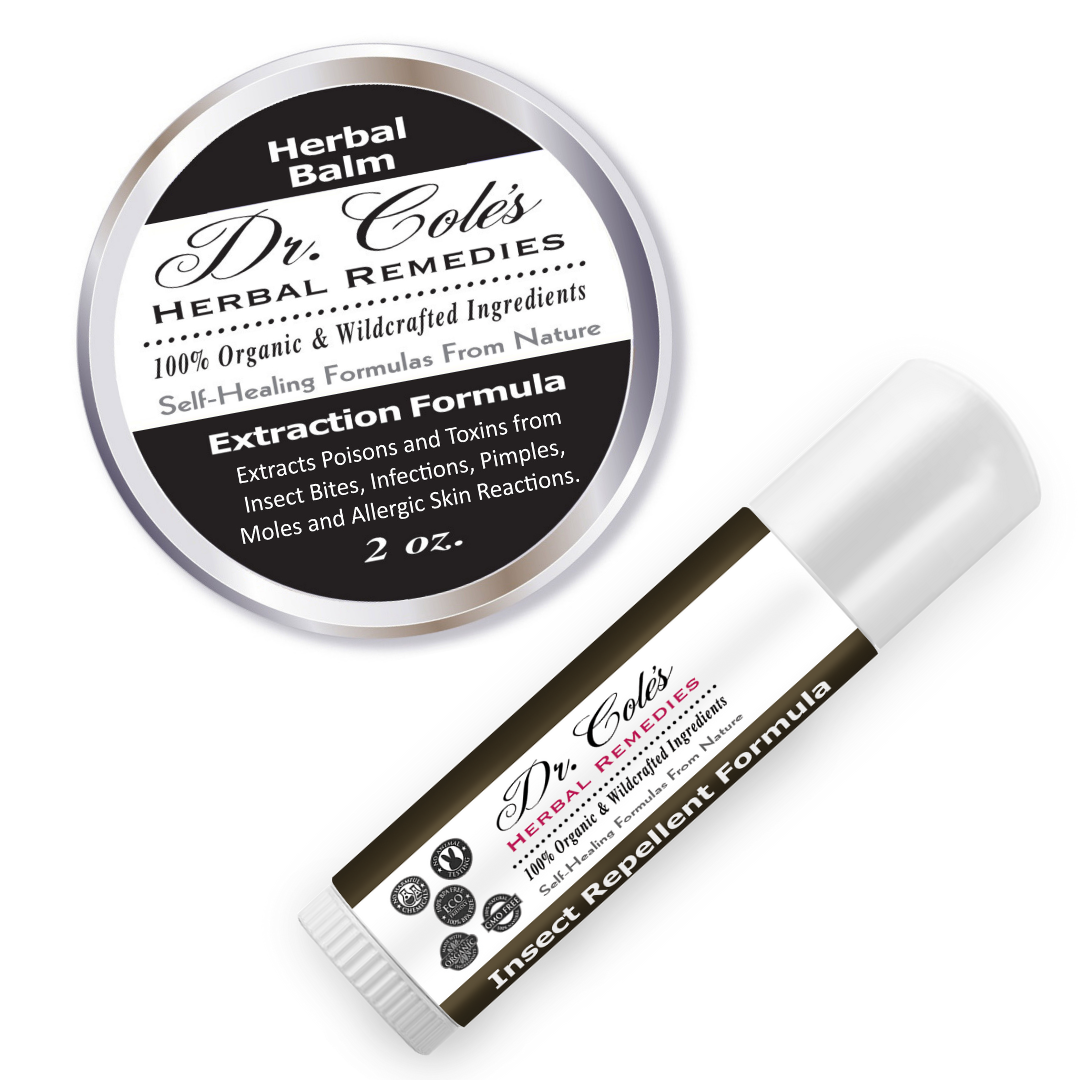 Dr. Cole's Insect First Aid Bundle - A must-have during summer months if you plan to be spending much time outside. Use Dr. Cole's Herbal Insect Repellent Stick to protect yourself and your loved ones from those pesty insects, yet, be ready to use Dr. Cole's Herbal Extraction Balm in case any insect bites occur. These two products work together beautifully to keep you protected from insects during the summer, or any time.